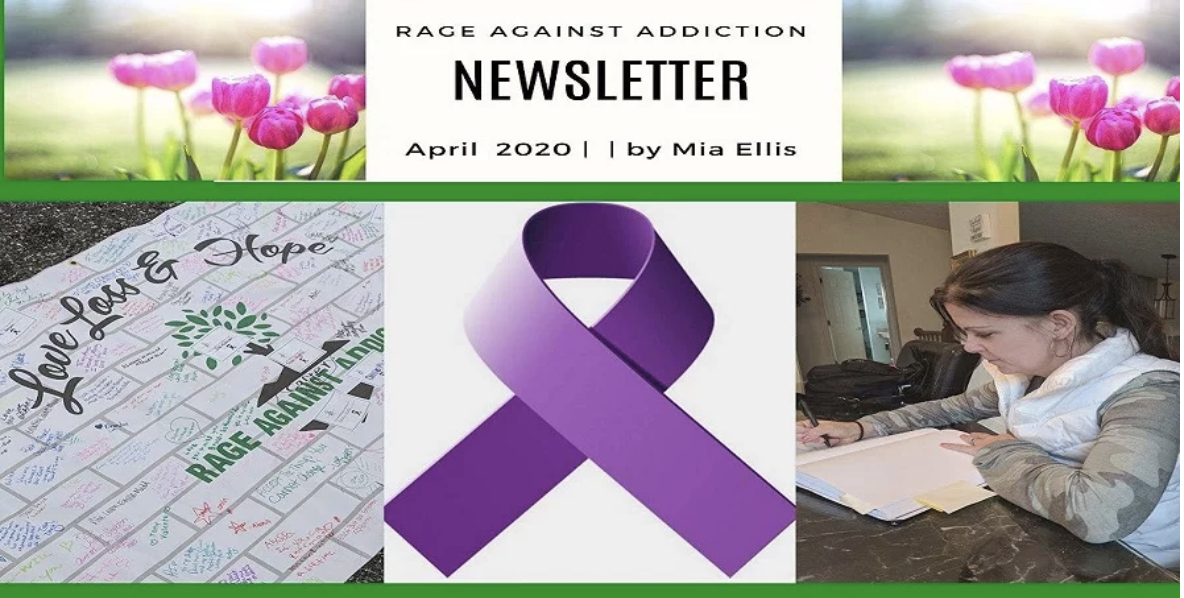 Every April since 2015, Rage Against Addiction held its Memory Walk / Recovery Run at Cedar Lane Regional Park in Bel Air, MD. However, due to the global COVID-19 pandemic, all schools and non-essential businesses are closed, and all events, including those hosted by RAA, have been canceled or postponed until further notice. We know how important it is to continue helping those in addiction, encouraging those in recovery, and remembering those lost so we held our 1st virtual Memory Walk / Recovery Run on Saturday, April 4, 2020. We asked our supporters and Facebook followers to still walk or run but to do it in their neighborhood, and to take photos and videos of their loved ones who have been affected by addiction (you can view some of the photos on the event’s Facebook page.) We had a wonderful turn-out; prior to this event going virtual, many participants had already registered as a walker or runner or donated via PayPal or to the event’s fundraising page. As the virtual event unfolded that morning, donations continued to come in to support Rage Against Addiction.

Though we all couldn’t join together side-by-side, it was amazing to know of the love, the hope, and the contributions from many of you. Addiction does not discriminate and it does not stop because of other serious illnesses and diseases. We are grateful to our supporters and our sponsors. We cannot do this without your generosity. 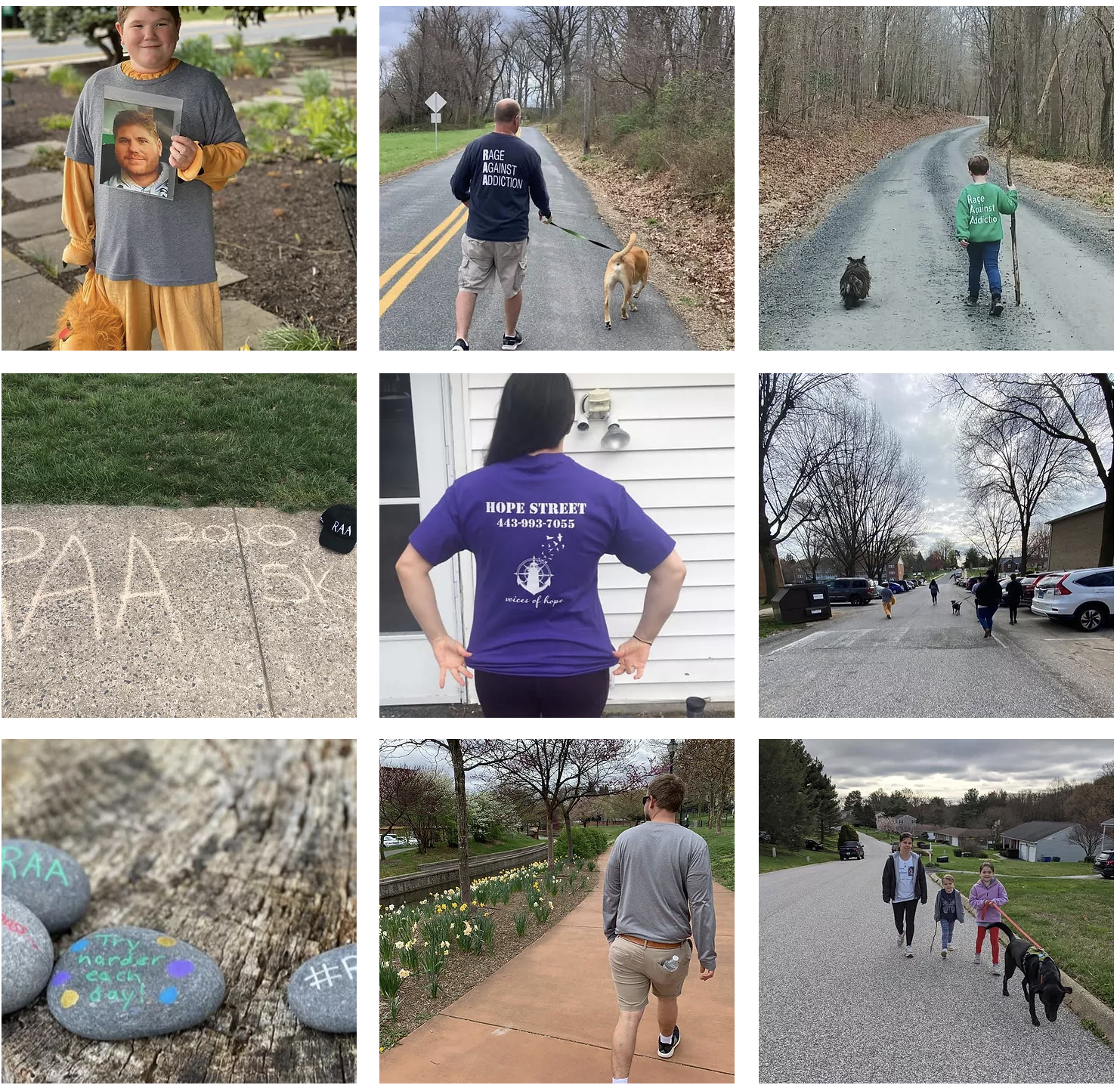 ​In the last month or so, our nation has been dealing with uncertainty, frustration, isolation, and many other emotions as the Coronavirus (COVID-19) has been rapidly spreading through hospitals and communities. Many other countries have been dealing with this illness longer than we have, and while most of us expected that numerous businesses and schools would shut down, it has been quite difficult to adjust to the separation and lack of personal interaction. However, for those wrestling with alcohol and drug addiction, this time has proven to be extra problematic as face-to-face Narcotics Anonymous and Alcoholics Anonymous meetings have been canceled, many people’s jobs are on hold or even lost, finances are tight, and the loneliness, lack of routine, and unpredictability can be huge triggers for anyone with substance abuse disorder or mental illness.

Addiction and mental illness do not follow the safety protocols in place to slow the spread of COVID-19; people are extremely stressed, and they are still struggling to get sober or stay sober. People are still dying from addiction, and to add more heartbreak to an already awful situation, many family members now cannot even have a proper goodbye. According to the Centers for Disease Control and Prevention, this virus could be especially serious to those who smoke tobacco, marijuana, or vape. Those who use opioids, either as prescribed or recreationally, or who use methamphetamines are also vulnerable because of the effects on respiratory and pulmonary health. Many individuals struggling with addiction and/or mental illness are more likely to experience homelessness and/or incarceration, and these circumstances carry unique challenges concerning the transmission of COVID-19.

​If you know someone who has substance abuse disorder or any kind of mental illness, please reach out, either by phone call, text or a drive-by visit where you can personally interact at a safe distance. Consider dropping off groceries or other needed items, mail a card, or have something special delivered. Any act of kindness and thought will certainly go a long way.

​If you are struggling in any way, please contact your local resources. Your area’s hospitals and churches could point you toward virtual Narcotics / Alcoholics Anonymous meetings, and your health insurance company could assist you in finding online therapy sessions or inpatient/outpatient mental health facilities. Consider contacting your sponsor for one-on-one virtual meetings, regional rehabilitation centers, or sober living houses. You can also check out the national Substance Abuse and Mental Health Services Administration for information and confidential referrals for substance abuse and mental disorders.  If you still need assistance with finding online meetings, please send us a message on our Facebook page and we will try to help as best as we can. I have been in recovery since July 20, 2013. That is when I had my last drink. As of April 1, 2020, that is 2,448 days (or 6 years, 8 months, and 13 days). I mark each day off on my calendar as a reminder of where I’ve come from and where I’m headed. I started drinking alcohol when I was about 16 years old; I drank it occasionally with friends in our woods. I realized it eased my anxiety so I continued to drink. And drink. I graduated from high school but not with the grades I wanted. I went to college occasionally but soon dropped out because I was not able to function and hide my drinking. I bounced from girlfriend to girlfriend, but soon women and my friends didn’t want to be around me. I held odd jobs but didn’t last long at any of them so I was not able to get my own place. I lived in my parents’ basement but eventually, they were tired of seeing me deteriorate. I fought a lot with my dad; my mom just cried. I barely spoke to my younger sister. I knew my family loved me and it hurt them to see me self-destruct but I had no idea how to fix my problem because I didn’t think I even had a problem. It wasn’t until I crashed my car for the second time – but this time it was into my sister’s car parked in the driveway as I tried to sneak out at night – that I realized that perhaps something needed to change. You would think that it finally hit me that *I* was the one that needed to change but in my altered state of mind, I believed what needed to change was where I was living. I packed up the next day and stayed with a friend for a couple of months. I didn’t offer to fix the damage to my sister’s car because I had no job and no money, and I stopped answering phone calls from my family. After my friend’s girlfriend kicked me out because I was “not positively contributing”, I ended up homeless. This lasted about 6 months until I finally sat on my parent’s front porch, waiting for them to come home from work, and asked them to let me move back in. Their condition was that I had to go to therapy appointments AND check into a rehab facility. With the help of someone at their church, I entered rehab 3 days after showing up on their porch. I thought it’d be a waste of time. But I met a sponsor there, really paid attention to what was said, and behaved. On my second day out, I met with my therapist for the first time and met with him once a week for the first year and now I see him twice a month. I also attend AA meetings once a week with my sponsor. I read The Bible, write out my thoughts, and really reflect on what was and what is. It’s not easy though. Some days are horrible. I cannot attend social functions that have alcohol, so invitations to places have been few and far between. My circle of friends has gotten smaller but that’s okay. Whenever I feel stressed – which is a lot lately – I would love “just one” drink but I know that would be dangerous for me. Thankfully I am able to meet with my sponsor and therapist online and have been attending church and AA meetings online too. My family always loved me, even when I screwed up, but I can feel the true happiness they have for me now that my life is going in a positive direction and that I am healthy. My message to anyone out there who was or is where I was: move forward. One-step and one breath at a time. It’s not easy and it takes work, but your life is on the line.

If you are interested in submitting a photo and story of your recovery, or a photo and a story of your lost loved one, please contact Mia Ellis at mia@rageagainstaddiction.com (Please keep your story between 350 and 450 words. We reserve the right to edit your content for spelling, punctuation, etc.)

A non-profit organization that assists with providing resources and support for addiction treatment and that educates the community about substance abuse disorder. Located in Fallston, MD. Please visit here or call 443-417-7810 for more information.

A local support group for those with addictive behaviors. Located in Bel Air, MD and Joppa, MD. ​

A local support group for those who have lost someone to addiction.

A clinic that provides immediate care for mental health and addiction. Located in Bel Air, MD. Please visit here or call 410-874-0711 for information about online and in-person meeting services.

A local support group for family and friends of those in active addiction.

HALO (How to Live Without Our Addicted Loved One):

An online grief support group specifically for those that lost loved ones to substance abuse. Click here to ask to join the private Facebook page. *Please read and answer the membership questions prior to joining.

Designed specifically for children affected by addiction to help them process their feelings and learn about the disease by offering counselor-led activities, such as equine and art therapy, nature walks, and more. The group meets several times a year. Click here for more information.

Chairman of the Board of Directors